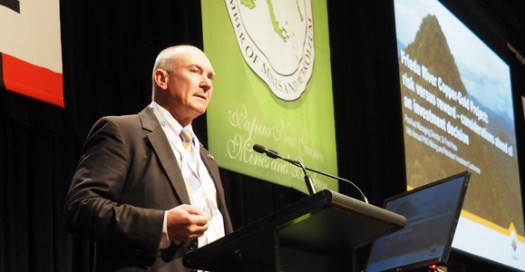 PanAust [owned by the Chinese company, Guandong Rising Assets Management] is keen to start development of the Frieda River copper-gold project, Managing Director Fred Hess told the Papua New Guinea Mining and Petroleum Investment Conference in Sydney last week. But he warned there are many obstacles to overcome before a final decision to go ahead with the mine.

Hess said the nature of the resource at Frieda River in West Sepik Province is well understood, noting that the project ‘has been known about’ for almost 50 years.

‘We are now in the phase where we are waiting for permit approval to take place,’ he told the conference.

‘Realistically, with the elections due next year, and with the size and complexity of the project, we are expecting that may take a while to get through to completion.

‘Once that process is finished, we then sit down and look at what the environment is like for making an investment decision and essentially there are a number of conditions that will have to be met in order for us to proceed to that investment decision.’

‘The embankment will take up about 40 per cent of the total capital cost of the project.’

‘That facility is designed to take the tailings from the processing plant and the waste from the mine and all of that sits behind a very large embankment,’ he said.

Hess said the embankment will take up about 40 per cent of the total capital cost of the project.

‘It doesn’t produce any copper but it is a necessary requirement in order to produce copper,’ he told delegates.

‘It is distinctive in the sense that PNG has traditionally taken cheaper forms of tailings and waste disposal routes.

‘But, because of the issues that we have with Frieda River being upstream from the Sepik River, this is the solution we have come up with which we think addresses all the environmental issues that are so important to a project like this succeeding.

‘There are no free lunches. We must be mindful of the risks of developing large scale projects.’

‘That makes it a unique storage facility in our assessment in being able to store not only tailings, mining waste and water but it can generate a return in terms of hydro electricity.’

Hess said the project is of national significance, describing it as a ‘world scale deposit’ that is in the top 10 undeveloped copper deposits in the world. He said it will create many jobs for locals, but he warned that there are challenges.

‘There are no free lunches. We must be mindful of the risks of developing large scale projects. Frieda River has substantial logistical challenges. It is inland; there are no roads.

‘It is ‘crucial not to jeopardise the livelihoods and environment for all those people downstream.’

‘For access to the site for the main logistics required you go up the Sepik River for 600 kilometres and then you need a road for another 100 kilometres, up to the actual mine site.

‘If you look at the terrain, it is relatively mountainous and it has a high level of rainfall all year round. That makes a challenging environment in terms of building stable structures and just undertaking the whole construction effort.’

Hess added that downstream of the project is ‘some 30,000 people who are very mindful and watchful of what is happening upstream’. He said it is ‘crucial not to jeopardise the livelihoods and environment for all those people downstream.’

Hess said there are no port facilities capable of supporting the mine and no electricity grid. ‘There are no roads. We are significantly infrastructure-challenged in this location. That challenge represents an additional capital burden to the project.

‘When making an investment that is multi-billion dollar, you want to have confidence over those multiple political cycles that the policy environment will remain constant.’

‘The other major risk we face is the policy environment in which we invest. This project, to generate a return, will probably take at least two political cycles in PNG and to actually realise the benefits of those returns, many more political cycles.

‘When making an investment that is multi-billion dollar, you want to have confidence over those multiple political cycles that the policy environment will remain constant, support investment decisions and underpin confidence that we are doing the right thing by investing in PNG and not some other jurisdiction.’

Hess added that the potential rewards are substantial, balancing the risk. He said the existing resource base of 2.5 billion tonnes of ore is ‘not closed off’ and that there are further opportunities.

‘We have a lot of confidence in developing the project. But I want to make it clear that we have to overcome a number of challenges.’

PanAust [owned by GRAM] controls 80% of the Freida River project, with Highlands Pacific the remaining 20%. As with all mining projects in PNG, the State has the option to buy in to up to 30% of the project prior to the granting 0f a special mining lease. PanAust applied for a Special Mining Lease in June 2016.