Can the law prevail over Chinese investments in Ecuador? 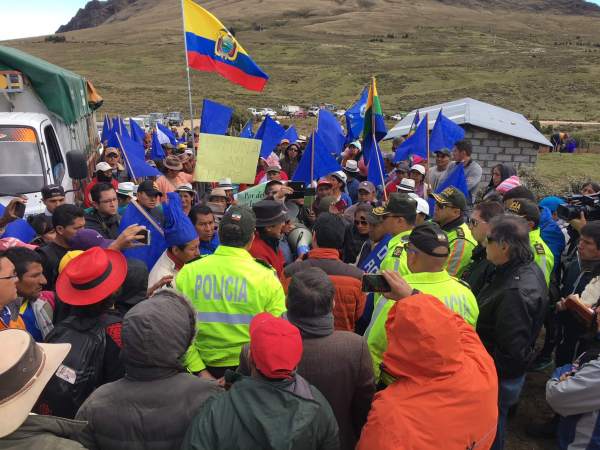 Last June, an Ecuadorean court ordered the suspension of all mining activities by a Chinese corporation in the highlands of Rio Blanco, in the Molleturo area of the Cajas Nature Reserve. It was a local court in Cuenca that gave the historic sentence: a court shut down an active mine for the first time in the history of Ecuador. Judge Paúl Serrano determined that the Chinese private corporation Junefield/Ecuagoldmining South America had failed to consult with the communities as required by Ecuador’s Constitution and by the UN Declaration on the Rights of Indigenous Peoples (UNDRIP).

Judge Serrano deemed the mining activity illegal and ordered the corporation to immediately suspend all its activities. Within two weeks, local communities accompanied police forces and local government officials in monitoring that the court order was respected.

The company appealed, and pressure was on the rise for the following hearing. The Chinese corporation privately offered $18 million to community leaders. Ecuador’s President, the Minister of Mines and the Minister of the Environment visited the province to pressure the local courts and indigenous communities to accept the mining activity. They defended “sustainable” mining as a form of development.

Affected communities consolidated their resistance, monitoring the access to the mine to impede mine workers to enter their territories, building support from neighboring communities, and informing the international community of the legal stakes.

On July 23, 2018, the court met again to either ratify or revert the decision to suspend mining activities in Rio Blanco. The court listened to all sides along with some expert testimonies; but there were discrepancies among the judges who postponed their verdict for another week.

Molleturo’s lasting vigilance for their waters

The Rio Blanco mine is located in the Molleturo-Mollepongo region, above ten thousand feet in the Andes. The mining license encompasses approximately six thousand hectares of paramos, lakes, and primary forests that nourish eight important rivers. This area replenishes the water system of the Cajas National Park, one of the largest and most complex water systems of Ecuador, which covers over a million hectares and holds immense water reserves.

The area is recognized as a natural biosphere reserve by UNESCO. These mountains have long been the home of Kañari-Kichwa indigenous communities. There are 12 archeological sites in the Molleturo area alone: the most famous one is the Paredones archeological site, located right by the mine.

The area is also a vital supply of water. These paramos provide water to 72 communities in Molleturo, freshwater to towns in the southern coast of Ecuador and to the city of Cuenca, the country’s third largest city which praises the quality of its drinking water.

The Rio Blanco mine is expected to be active for seven years, removing about 800 tons of rock per day and using cyanide to extract gold and silver. This entails an estimate of one thousand liters of water per hour that would be contaminated with deadly toxic waste, including arsenic, before being thrown back into rivers and soil.

Local indigenous communities were never consulted prior to the development of the project that would benefit from a recent Ecuadorean law incentivizing foreign investment. Nor did they give their consent to the licensing of their territories to the Junefield corporation. They reject the mine because it would contaminate their waters.

Women are at the forefront of the resistance that began almost two decades ago, when the mining license was first issued. Molleturo communities have been arguing in defense of water more or less actively over the last decade and a half but stepped it up when the mine started its activity in May 2018. Protests exploded, and a group burned out the miner’s living quarters.

Nobody was hurt in the explosion, but the police intervened, heavily armed, to militarize the area. The next day, protesters called in the president of Ecuador’s Confederation of Kichwa People Peoples for help, Yaku Perez Guartambel, but workers from the mine kidnapped him for eight hours, threatening to kill him. Tensions boiled to new heights.

Prior consultation as a fundamental indigenous human right

The Judge ordered the suspension on the mine–invoking constitutional and international indigenous rights to prior consultation.

Rosa, a delegate from the Andean Network of Indigenous Organizations (CAOI), discusses the territorial dimension of self-determination to community members gathered in the páramos of the Cajas mountain range. Photo: Manuela Picq

Since 1989, Art. 6 of the International Labor Organization Convention 169 safeguards indigenous rights to prior consultation on projects taking place on indigenous territories. Art. 18 of UNDRIP establishes indigenous rights to participate in decision making relating to their territories, and Art. 19 establishes that states must consult “in good faith” to obtain indigenous “prior, free, and informed consent: about legislative of administrative measures impacting their communities. In 2016, Art. 25 of the American Declaration on the Rights of Indigenous Peoples reiterated these principles in the context of the Organization of American States.

Prior consultation is not a simple law; it constitutes a fundamental human right of indigenous peoples because their existence is intimately tied to their territories. Their culture, lifeways, and community structures are woven into territorial autonomy.

An Amicus Curiae from a Chinese environmental lawyer

About half a dozen amicus curiaes were presented to Cuenca’s court supporting the communities right to prior consultation, from a range of organizations including the Environmental Defense Law Center, Ecuador’s Ecumenic Commission of Human Rights (CEDHU) and the Ecuadorian group Critical Geographies. Amicus were presented by scholars from Ecuadorean and American universities, including Universidad Internacional del Ecuador, Universidad de Cuenca, Universidad San Francisco de Quito, American University, and Coastal Carolina University.

Environmental lawyer Jingjing Zhang, from Beijing, submitted an amicus in which she provided an overview of relevant Chinese laws and regulations. She testified to the court on July 23, 2018, explaining that China ratified the UN Declaration on the Rights of Indigenous Peoples in 2007, thus supporting prior consultation and consent for any project on their territories. She reminded the words of the Chinese delegate at the 13th Session of the UN Permanent forum on Indigenous Issues (2014): “ the international community is duty bound to fully meet the legitimate requests of indigenous peoples, to promote and protect their basic human rights and freedoms, to safeguard the natural environment and resources on which their survival depends” and China “firmly supports the promotion and protection of the basic human rights and fundamental freedoms of all indigenous peoples around the world. ”

She explained to the court that China has regulations establishing that enterprises may not violate international treaties ratified by the Chinese government and that they are bound by the laws and environmental regulations of the host country. She stated that The Communist Party of China (CPC), State Council, and various government agencies have issued policy guidelines that encourage Chinese companies to focus on ecological environmental protection in their foreign investments. In her view, the Chinese government has deep concerns on the law-abiding and environmental performance of Chinese companies operating overseas.

Her amicus concluded that China’s Environmental Protection Law, Environmental Impact Assessment Law, and the Government Information Disclosure Regulation have strict provisions on the public participation rights of citizens. These regulations are based on the same principles and contain similar provisions to the Ecuadorian norms on the rights of indigenous peoples to prior consultation.

One step forward or two sets back?

The private corporation Junefield/Ecuagoldmining South America did not have to do engage in public debate, Ecuador’s government is taking the lead. It was the Ministry of the Interior who accused indigenous peoples to defend the interests of the Chinese corporation. “The state proves that it is the best lawyer of mining companies,” says Yaku Perez Guartambel.

Will the criminalization of nature defenders continue? For now, judges are holding off a final verdict, and as the clock ticks political and economic pressures thicken. Molleturo leader Fausto Castro says that communities want their right to life back, and that they seek a peaceful solution to this mining conflict. It is indeed an achievement that serious confrontations were avoided, but this may not last forever. Yesterday, when the Judge staved off sentence as hundreds of nature defenders awaited outside the courtroom, many expressed their fears: “if the court reverts its sentence to benefit the State, it is a declaration of war.”

Filed under Human rights, Mine construction