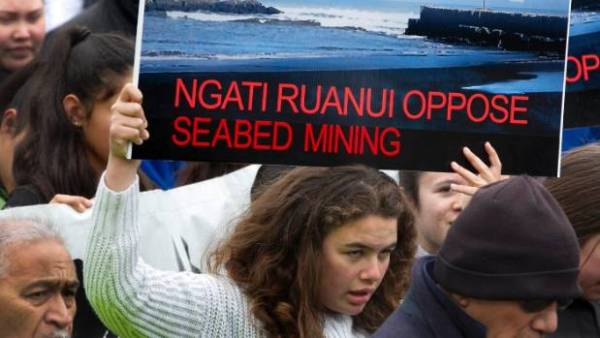 Ngati Ruanui protested against Trans-Tasman Resources’ bid for marine consent to mine the seabed for iron sand. More than 6000 people signed the petition calling for a moratorium on seabed mining. (File photo: Monique)

Trans Tasman Rescorses have decided to appeal the High Court decision that quashed their consent to mine up to 50 million tonnes of ironsand from a 66 square kilometre area off the South Taranaki Bight for 35 years. (File photo)

A mining company who has had their controversial consent to mine the seabed off South Taranaki denied for the second time has decided to appeal the High Court decision to stop them.

Trans Tasman Resources (TTR) has been trying to gain access to mine the South Taranaki seabed for years and was granted it in August 2017 by the Environmental Protection Agency (EPA). However, about three weeks ago the High Court quashed their consent on the grounds that the company’s method of environmental management was illegal.

TTR executive chairman Alan Eggers announced on Friday the company intended to lodge an appeal against the High Court’s decision, but first had to gain the permission of the court to do so.

“Today TTR has lodged a notice to the Court of Appeal to seek leave to appeal the High Court judgment of August 28, 2018 regarding our marine consents for the South Taranaki Bright iron sands project,” Eggers said.

Eggers would not answer any of Stuff‘s questions but said the basis of TTR’s appeal would be that they believe the EPA did follow a “legally correct approach in granting a marine discharge consent”.

The High Court decision to quash TTR’s contract, which granted consent from the EPA to mine up to 50 million tonnes of ironsand from a 66 square kilometre area off the South Taranaki Bight for 35 years, was because they’d planned to use an “adaptive management approach”.

Adaptive management is allowing an activity with uncertain effects and continually assessing it – essentially trying it out, seeing what happens and adapting the conditions accordingly, which was argued to be illegal under New Zealand law applying to the Exclusive Economic Zone and continental shelf.

Cindy Baxter is the chairperson of Kiwis Against Seabed Mining (Kasm), who were one of the parties who appealed the granting of consent, and said she was “unsurprised” with TTR’s desire to appeal the decision.

This is TTR’s second application to mine. It first applied and was denied in 2014, and Baxter was sick of them continuing to push despite denial and vocal opposition.

“I really wish that they would just go away – there’s a huge opposition,” she said.

“We’re standing on the shoulders of tens of thousands of people.”