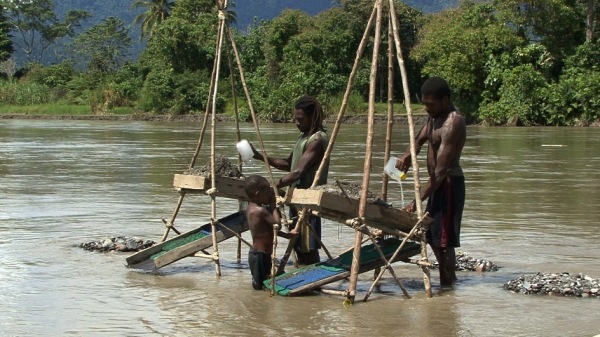 Alluvial miners at work on Bougainville

More than 40 million people around the world work in artisanal and small-scale mining where minerals including gold, diamonds and cobalt are dug up often by hand, a report by the World Bank and development organisation Pact said on Wednesday.

Increasing demand for metals and rising prices have triggered a boom in small-scale mining in recent years, mainly in poorer countries in South America, Africa and Asia.

These mines are a vital source of income for communities, but many operate outside the law and leak chemicals into rocks, soil and rivers. Working conditions can be appalling, and the metal and stones dug up are often smuggled across borders on a vast scale, sometimes by criminal operations.

Billions of dollars worth of gold is being smuggled out of Africa, a Reuters investigation found this week.

The World Bank and Pact said too little was known about how many people worked in small mines and previous estimates, which were often far lower than 40 million, tended to be partial or rely on outdated data.

“It’s time to shine a light on this vital sector so we can accelerate investments in people and communities for greater equity and sustainable economic growth,” Riccardo Puliti, the World Bank’s head of energy and extractives global practice, said in a statement.

Another 9.9 million people worked in sub-Saharan Africa, the report said, with 2 million in the Democratic Republic of Congo and between 1 and 1.5 million each in Sudan, Ghana and Tanzania.

Just over 2 million people work in the industry in Latin America and the Caribbean, with 1.9 million more in the Middle East and North Africa and 100,000 in Eastern Europe and Central Asia, it said.

Thirty percent of the workers globally were women, the report found.

Minerals mined in small-scale and artisanal mines include gold and diamonds, used for jewellery and investment, and tin, tungsten, tantalum and cobalt consumed in industry, electronics and batteries that power electric vehicles.