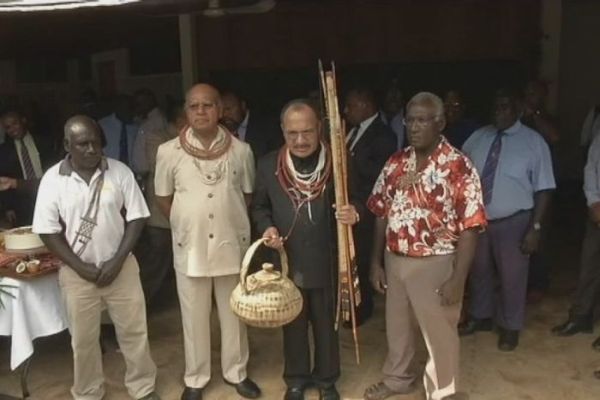 Momis and O’Neill at a reconciliation ceremony in 2014. (ABC/AUSTRALIA NETWORK NEWS)

The Prime Minister of Papua New Guinea has written to the Bougainville government asking it to consult more widely over proposed changes to the autonomous region’s Mining Law.

Peter O’Neill in a letter to President John Momis last month said the changes have the potential to cause discord and conflict.

Mr Momis said the law change will allow landowners to retain control of minerals once they have been mined.

But landowning groups, especially the Osikaiang group at the site of the key Panguna mine, allege this is an attempt to shut them out along with their preferred joint venture company, RTG.

James Onartoo of Bougainville Indigenous Rights Advocacy has accused Mr Momis of deliberately trying to spread misinformation on the matter.

He said the proposed amendment removes the protection of customary landowners’ rights and attempts to replace them with vague benefits and entitlements.