Photo confirms AFP officers visit to the Panguna mine 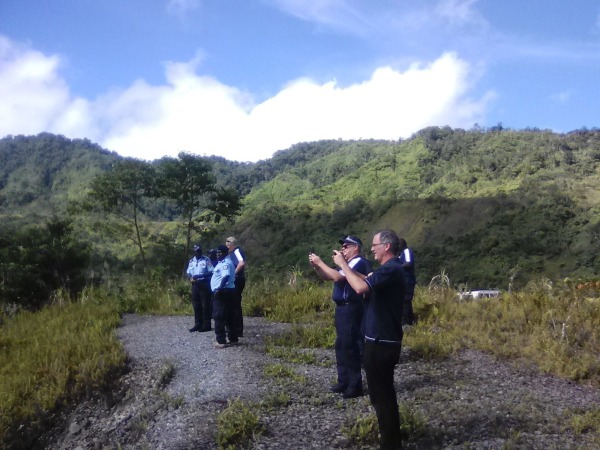 Australian Federal Police take photos at the site of the abandoned Panguna mine.

The Chairman of Bougainville Hardliners Group and former combatant turned businessman, James Onartoo has called on the Autonomous Bougainville Government (ABG) Police Minister to explain what the Australian Federal Police (AFP) were doing at the site of the controversial Panguna mine on Wednesday, June 5.

According to Mr. Onartoo, members of the communities around the mine site became suspicious when they saw the Australian police taking GPS readings at various points around the mine. This points included the one where the mining company BCL considered building an airstrip in the early part of the Bougainville crisis, to bring in aircraft supposedly to evacuate expatriate mine workers and their families out of Panguna.

“I think the public is owed an explanation as to what is happening. To the best of my knowledge the AFP were ousted in 2007 on suspicions of spying on the ABG and the people of Bougainville by the former President, late Joseph Kabui.

“Their presence at Panguna, which is the site of so much controversy and disagreements plus issues of sensitive nature stemming from proposed reopening by ABG, raises serious questions considering the fact that in the past Australia always supported military intervention by Papua New Guinea Defense Force to regain control of the mine.

“If AFP can raid ABC office in Australia itself then they are capable of anything including maybe gathering intelligence on ground for the purpose of regaining control of Panguna and restarting the mine with use of force,” Mr. Onartoo said.

Mr Onartoo said that it is a well known fact that Australia’s interest in the mineral deposits at Panguna never declined and Australian advisors to ABG have denounced agriculture, tourism, fisheries and other sustainable industries saying that only mining is able to finance Bougainville’s independence. Several companies which are vying to reopen the Panguna mine, which was shutdown by landowners in 1990, are also of Australian origin.