Dead fish prompt new calls to shut down Ramu mine 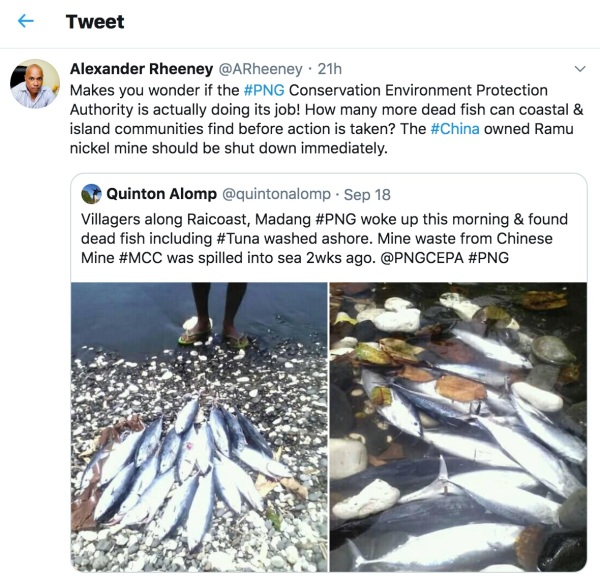 He said villagers are confused as to what would be the cause of this, but they have refrained from fishing, following this occurrence.

Mr. Warr said reports have emerged of fish dying as well in Karkar and Bagbag Islands – something which he says needs to be confirmed as well.

A team led by Madang Provincial Administrator Joseph Kunda Bonomane with representatives from the National Fisheries Authorities, National Disaster office and Health among others are now traveling to the site to collect fish samples, for testing.

Meantime, people in the Raicoast District of Madang Province are questioning what has become of the report on the ‘200-000 litres toxic slurry’ spillage which occurred in August, from the Ramu Nickel Mine’s Basamuk processing plant.

The Chinese company which has invested over six billion kina in the project, came out recently revealing the magnitude of the spill following outrage by locals after the colour of the sea in the area turned red, brown and orange.

The spill material – reportedly ‘very toxic’ was a result of a pump failure caused by an electronic fault which led to an overflow.

A few weeks later now, with fish turning up dead on the shores in the same area – the locals want answers.

Mr. Thomas Warr said it’s hard to understand when you have big mining operations like this and yet no testing facilities for instances such as this.

He said now, everyone has to wait for samples to be sent overseas for testing and the people are kept in suspense – in most cases there is no feedback at all.

NBC News understands, residue from the spillage were sent to Australia for testing, and results are expected this month.