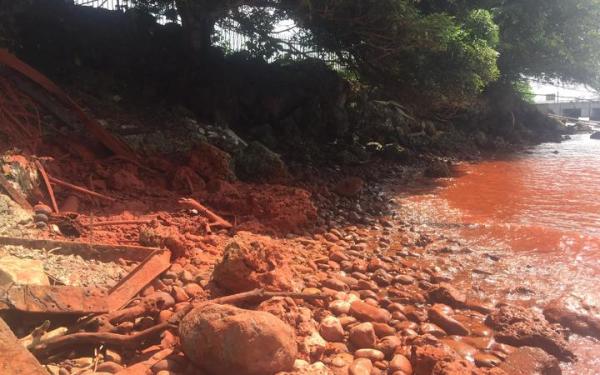 It is confirmed that sea waters in Madang is contaminated and poisoned by highly toxic slurry spill from the Basamuk refinery in Raicoast few months ago.

The independent Swiss specialist Dr Mojon who was engaged by the Madang provincial administration has confirmed this in his findings.

This will have a negative impact on the lives of people. Madang provincial government has already warned the people not use or consume fish from the sea and this is likely to continue on for an indefinite period of time depending on the assessment and solution of this problem.

People living by the sea and on the islands like Karkar, Krangket, Manam,Bagbag, Long Island and other smaller islands have already started feeling the effect.  The sea is their life and poisoning it is simply starving them to death.

The microsocio-economic cycle and protein supplement of these people has been completely snapped.

This issue also affects tuna production in Madang. Currently, the company is canning fish which are in stock and may stop canning, awaiting the purification of the sea from the poison. People are also afraid to buy canned fish sold in stores and supermarkets.

The deep sea tailing project (DSTP) has been challenged in court by landowners of Basamuk and MCC. The court issued the direction to have constructive measure and a proper regulation system in place to closely monitor the facility but this has never been done which has resulted in the spill and poisoning of sea water.

The people of Raicoast and those on the islands are experiencing all kinds of illnesses.  Vegetation near the shores are turning yellow and drying up. Dead fish are filling the sea shores. People have been attributing these matters to black magic and sorcery but now they have come to realise that toxic waste from the mine has been the cause of these problems.

The department of environment, conservation and climate change and developer MCC are rebutting the report of the scientist is ridiculous. They are showing their lack of concern for the damage done and how to solve this issue amicably.

The Madang provincial administration must be applauded for undertaking this issue seriously and that the mine has to stop until all investigations are done and proper measures are in place to guarantee the safety of our people.

One response to “Madang people suffering from Ramu mine spill”