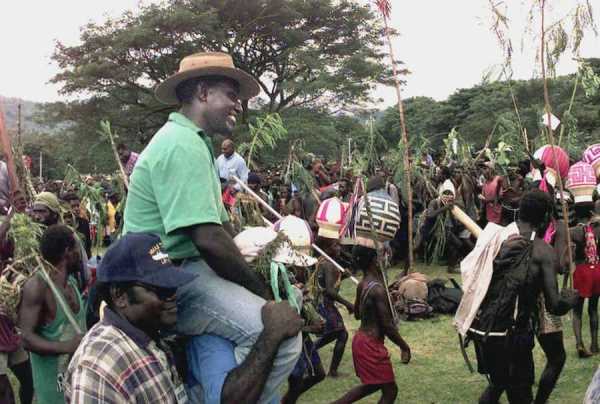 An ongoing independence referendum does not address the key question at the root of the conflict: the future of the Panguna mine.

On the small island of Bougainville, a region of Papua New Guinea, voters are currently taking part in a long-awaited referendum on independence that started this Saturday. Twenty years after the end of the deadly Bougainville conflict, this referendum gives voters the chance to decide between substantial political autonomy or complete independence. While the voting period lasts until December 7, early estimates predict that Bougainvilleans will vote overwhelmingly for independence.

The peace agreement that ended the conflict in 2001 has so far allowed the region to take incremental steps toward enhanced self-government while maintaining a delicate peace. Whether this peace process will result in a durable peace depends entirely on the outcome of the referendum, the final and most important step of the process.

The Bougainville conflict centered around the Panguna mine, a large-scale copper and gold mine that was built in 1972 amid significant local opposition. During its operation, the mine was responsible for over 40 percent of Papua New Guinea’s national export revenue. The mine dramatically reshaped local society as the mining company clear-cut forests, forcibly relocated villages, and introduced thousands of higher-paid foreign workers to operate the mine. The millions of tons of pollution created by the mine’s operations also quickly contaminated the surrounding bodies of water and agricultural lands.  Collectively, these changes presented what the indigenous Bougainville people viewed as an existential threat to their way of life.

In 1989, Bougainvilleans forcibly shut down the mine. This provoked a harsh armed response from Papua New Guinea.  In response, the rebels declared independence from Papua New Guinea.  Over the next decade, the two sides fought over the future of the mine and, by extension, Bougainville’s political, environmental, and economic independence.  The conflict, marked by atrocities, forced relocation, and a debilitating blockade by Papua New Guinea, resulted in 20,000 deaths, 10 percent of Bougainville’s population, as well as the displacement over another 30 percent of the population.

Somewhat surprisingly, the comprehensive and detailed peace agreement that ended the conflict did not address the future of the mine – the primary conflict driver.  The agreement instead focused on increased self-government and a path to potential independence. This framing has so far allowed Bougainville and Papua New Guinea to maintain a delicate peace as the Bougainville government assumed greater governing responsibility yet kept the mine closed.

At the same time, this framework also presented Papua New Guinea with an opportunity to separate the promise of political independence from Bougainville’s broader goal of protecting the environment and its indigenous way of life. With growing external pressure to reopen the mine, these issues have increasingly been framed as mutually exclusive options that Bougainville must inevitably choose between.

Since the creation of the Autonomous Bougainville Government in 2005, Papua New Guinea and other external funders have provided the Bougainville government with the majority of its funding.  Bougainvilleans have so far envisioned a future economy centered on sustainable agriculture and fishing industries.  It will take significant time, patience, and investment, however, for these industries to produce revenue that could replace the external aid Bougainville currently receives.

To prepare for independence, Papua New Guinea has pressured the Bougainville government to instead achieve fiscal self-reliance by reopening the Panguna mine.  A number of mining companies have expressed an interest in contracting and operating a reopened mine.  Notably, both the government of Papua New Guinea and the government of Bougainville each hold a substantial (36.4 percent) ownership interest in the mine, which was transferred to them in 2016 by the mine’s previous majority shareholder Rio Tinto.

The environmental scars from the mine continue to haunt the island. Cleaning up the pollution that remains would potentially cost billions of dollars, a price far out of reach of Bougainville’s current economy. After the transfer of shares, Rio Tinto rejected responsibility for the mine’s environmental damage.  Today, some parties argue that reopening the mine with greater environmental protections is the only feasible option for generating sufficient revenue to remediate the prior environmental damage.

Strong public resistance in Bougainville has so far kept attempts to reopen the mine at bay.  With the arrival of the referendum date, however, the forces coalescing around the reopening of the mine have redoubled their efforts to overcome this public resistance.  Amid this pressure, rather than resolving the conflict, the referendum’s narrow focus on political independence may instead reignite it.

Dr. Paul R. Williams is the Founder of the Public International Law & Policy Group, and the Rebecca I. Grazier Professor of Law and International Relations at American University.

Carly Fabian is a Research Fellow on Justice, Peace, and Security at the Public International Law & Policy Group.

Filed under Bougainville, Mine construction