Rural alluvial miners to be empowered 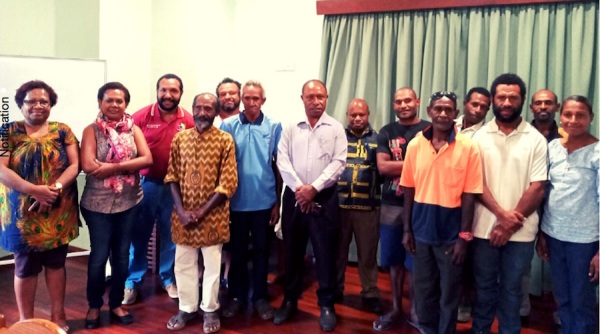 This was highlighted following a discussion with four tenement holders of Wau, Bulolo and Watut River in Bulolo District.

Governor Saonu said MPG has now engaged the services of Albatross Integrated Limited, who have extensive years of working with alluvial miners and other mining projects of New Ireland Province.

The company will be the coordinating body to ensure the alluvial miners are empowered.

“These are new interventions undertaken by MPG and to drive the agenda of mining in Morobe,” Governor Saonu stated.

“I have appointed a Tutumang committee chairman for mining who will work closely with the alluvial miners, landowners, miners associations and cooperative societies from here and onwards to ensure they are fully taken care of in their activities. All reports will then be presented back to PEC on the progress of the alluvial miners.

“I understand that over the many years, the landowners and historical miners of small scale mining in Wau- Bulolo have been deprived of the full benefits of their gold, and so it is time for MPG to intervene to assist them to reach maximum benefits of alluvial gold.”

Governor Saonu said plans are in place to ensure all alluvial gold collected by the landowners and tenement holders are made into gold bars to ensure financial security in the long run.

“The Regulatory Operations Division (ROD) of the Mineral Resources Authority and Albatross Integrated Limited will work now more closely with the landowners and tenement holders to ensure the all are fully taken care of in their alluvial mining activity.

“The aim of empowering the alluvial miners is part of the Economic Policy of Triple 1, where people of Morobe are empowered at which activity they are engaged in to be financially sound,” Governor Saonu explained.

He further emphasised that financial literacy training will be conducted for all Wau-Bulolo alluvial miners as well to ensure they are financially capable.

Matthew Dalga, the MRA Development Engineer at the Small Scale Mining Branch representing ROD and MRA, said alluvial mining has huge potential and it can bring positive benefits if well-coordinated and supported.

“The MRA will support wherever possible in terms of compliance and ensure the regulatory process is followed so that the initiative taken progresses to a positive direction,” he stated.

Albatross Integrated Limited Principal Bridget Laimo said all good governance and transparency mechanisms will be in place to ensure all alluvial tenement holders and people are given maximum benefit for their efforts.

“Albatross working will be a family orientated partnership with the alluvial miners from onwards,” she stated.

“The levies retained from the alluvial gold sold will go back to your communities to help build roads, schools and all other necessary development infrastructure.”

Albatross Integrated Limited for six years have been working with landowners at New Ireland Province, and also up at Hides and Porgera and will now do the same for Morobe.