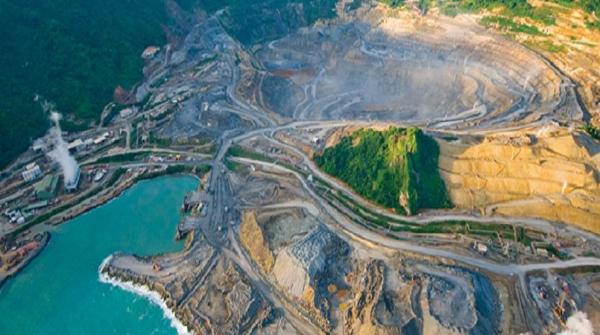 The Lihir gold mine in Papua New Guinea

Australia’s largest listed goldminer says it expects to produce around 10 per cent less gold than previously forecast due to underperformance of its mines in Papua New Guinea and Western Australia.

Newcrest Mining now only expects to produce 2.1 to 2.2 billion ounces of gold this financial year, down from a forecast of 2.38 to 2.54 billion ounces it made on January 30.

The goldminer said increased production at its Cadia mine in central-west NSW and Red Chris mine in British Columbia, Canada won’t be enough to outweigh shortfalls from its Telfer mine in WA and Lihir mine in PNG.

Lihir, located on an extinct but geothermically active volcanic crater on Aniolam Island 900km northeast from Port Moresby, is proving to be particularly difficult, Newcrest said.

“Lihir has been challenged by difficult mining and geothermal conditions, leading to a sub-optimal blend of ore feed to the plant,” Newcrest managing director and chief executive Sandeep Biswas said.

“Operating improvements planned at Lihir for the remainder of FY20 will be insufficient to address its shortfall in production.”

Newcrest also announced it had found a “pod” of high-grade mineralisation at its Havieron Project, 45km from its Telfer mine in WA.

Mr Biswas called the mineralisation “amongst the most impressive seen in recent memory” and said Newcrest was excited about mining it.

Newcrest said it would study the potential of Havieron into commercial production in about three or four years.