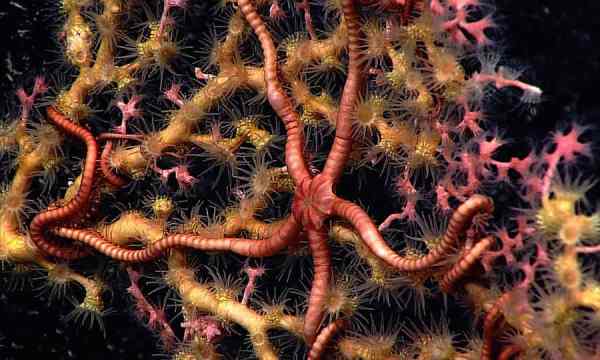 Deep sea corals provide habitat to a variety of organisms that could be destroyed by deep sea mining. Photograph: NOAA

Sir David Attenborough has urged governments to ban deep sea mining, following a study warning of “potentially disastrous” risks to the ocean’s life-support systems if it goes ahead.

The study, by Fauna and Flora International (FFI), warns proposed plans to mine the seabed could cause significant loss of biodiversity, disruption of the ocean’s “biological pump”, and the loss of microbes important for storing carbon. The process, requiring machines operating thousands of metres under the sea, could also create plumes of sediment that smother areas far from the mining sites and kill wildlife.

Dozens of exploratory licences, two of which are sponsored by the UK, have already been granted for huge tracts of the sea bed, ahead of a race to mine commercially for ores and minerals such as copper, used in mobile phones and batteries. But the rules to govern the responsible exploitation of this global resource are not finalised – they are expected to be completed at a meeting in July at the UN International Seabed Authority.

Attenborough, the vice president of FFI, said deep sea mining could create a “devastating series of impacts” threatening processes critical to the health and function of the oceans, and called on governments to be guided by scientists.

“Fauna & Flora International is calling on global governments to put in place a moratorium on all deep sea mining – a call I wholeheartedly support,” Attenborough said.

In a foreword to the report, Attenborough said it was “beyond reason” for countries to consider the destruction of deep sea places before they have understood them or the role they play in the health of the planet.

Attenborough said: “The rush to mine this pristine and unexplored environment risks creating terrible impacts that cannot be reversed. We need to be guided by science when faced with decisions of such great environmental consequence.”

FFI warned that human activity was already putting a huge strain on the oceans, which have absorbed a third of our carbon emissions and 93% of the extra heat trapped by the rising concentration of greenhouse gases.

Oceans are becoming more acidic because of the carbon dioxide dissolving into them, fisheries are under pressure as a result of over-exploitation and there are hundreds of huge “dead zones”, it said.

Pippa Howard, director at FFI and lead author of the report, called for a moratorium on deep sea mining. She said: “The conclusions we have come to after extensive study could hardly be more troubling.

“From methane release to disruption of the ocean’s life-support systems and the destruction of unstudied ecosystems, the risks of deep sea mining are numerous and potentially disastrous.”

Louise Casson, of Greenpeace’s Protect the Oceans campaign, said the UK government’s holding of exploration contracts for deep sea mining was at odds with its position as a “global ocean champion”.

Casson said: “The UK government now has a choice to make: listen to industry and press ahead with this dangerous new practice, or listen to scientific warnings, public concern and the creator of Blue Planet himself and ban deep sea mining.”

A government spokesman said: “The UK continues to press for the highest international environmental standards, including on deep sea mineral extraction.

“While we have sponsored two exploration licences, these allow only for marine research to understand the effects of deep sea mining.

“We will not issue a single exploitation licence without a full assessment of the environmental impact.”