THE proposed Amendment of the Bougainville Mining Act (BMA) was rejected outright.

It was rejected by the Panguna Landowners, Ex-Combatants, No Mining Groups, Core Team, the eight Association Chairmen of the Mining Affected Areas including the Special Mining Lease Osikaiyang Landowner Association (SMLOLA) members and the general public in Arawa who were present at the first attempt to consult on the new Bills – the ABG Consultation with the Panguna Mine Affected Landowners’ meeting, held at the Arawa Youth Centre yesterday.

SMLOLA chairman Martin Miriori said: “There were no answers that could explain or rationalise the attempt to steal our minerals and deny us all our rights under the BMA.

“Why is that, the Bills have been referred to the Legislative Review Committee as it is supposed to be subjected to independent reviews and consultations but there is nothing independent here.”

“They now seem to be trying to go even further, making it very clear that landowners will not have any interest in the mining company.

“The Government will be entitled to hold all the shares, something like Kumul Holdings or MRDC.

“But our law was very carefully drafted to be different to reflect the particular needs and history of Bougainville and its landowners.” Mr Miriori added.

During the presentation, Mr Wilson acknowledged that the SMLOLA’s proposal to the ABG is good but said the Government needs to create this entity through the amendment of the BMA to cater for money going into Government.

In response, Mr Miriori said this makes no sense, the SMLOLA proposal allows the Government to set up a new company and negotiate the deal terms, providing funding directly for the ABG and immediate funding for the Referendum in advance of finalsing documentation.

“There is absolutely no need to push this offensive legislation as the ABG is already being offered a priority position, better than the landowners.”

Mr Miriori further challenged the BEC to demonstrate why landowners should support their plans when it denies them every right that was fundamental to the Peace Agreement, the Constitution and their very autonomy.

“Being told we will give up all their rights with no say and not even one kina of compensation, just a vague promise in the future of something in “one form or another” as the Bill actually says.

“They are suggesting we should just take whatever we are given.

Given the BEC was not able to provide any answers to these very important questions, a resolution by the SMLOLA and Panguna Mine Affected Landowner Associations was then presented to the ABG by Mr Miriori clearly stating the proposed Bills are unfair, unreasonable, unconscionable and unconstitutional.

“If passed they will be challenged and Panguna is delayed indefinitely. “Nobody wins – in fact we all lose.” Mr Miriori added. 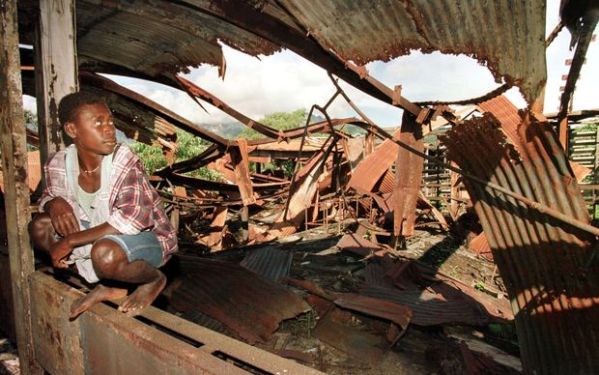 The Bougainville Civil War caused incredible devastation and loss, including this picture taken at the ruins of Arawa Hospital in 1997. Photo: AFP

A former prominent leader in Bougainville says Papua New Guinea has to start discussing compensation for the damage it caused during the civil war.

Martin Miriori, who led the Bougainville Interim government during the latter stage of the war, says the Joint Supervisory Board talks on Friday in Arawa should consider compensation.

The talks, between the PNG and Bougainville governments, are to lay the final preparations for a referendum next year on possible independence for Bougainville, as laid down in the 2001 Peace Agreement.

Mr Miriori said PNG needs to be held responsible for killing thousands, for the burning down of hundreds of villages and the destruction of property, and these issues need to be talked about now.

The trailer for New Zealand documentary maker Will Watson’s forthcoming documentary about the Bougainville peace process, Soldiers Without Guns.

A Bougainvillean leader has accused Papua New Guinean Prime Minister Peter O’Neill of “undermining” the island’s 17-year-old peace agreement and the independence vote due next year.

Martin Miriori also condemned O’Nell for lacking sensitivity over Bougainville that struck a New Zealand-brokered peace agreement which ended a 10-year civil war and included a referendum vote on independence.

Miriori, a Panguna landowner and pro-independence leader, was reacting to a statement by O’Neill at the Business Forum in Brisbane last week and repeated in PNG’s The National newspaper that the vote was not about independence, but what was best for the people of Bougainville.

“When the prime minister comes out openly making such a statement in public, my view is that he is already undermining the good intentions and the spirit of the Bougainville Peace Agreement which, among other issues, clearly states that the issue of independence for Bougainville will be also among the options for a referendum vote to be taken by the people [in] June next year,” he said today in a statement.

“This is also the common understanding of the international community as well [as] including the United Nations,” Miriori said.

“For the prime minister to water down the main focus on the independence issue at this time is simply a big slap on the face [of] the people of Bougainville.”

Miriori said Bougainvilleans would not have “fully committed themselves” to the joint partnership with Papua New Guinea in the peace process if they knew that they were “going to be tricked”.

“We must not lose the trust and confidence of the people at all cost, and in doing so try to confuse them by making such statements, which could easily undermine all our good work and tireless efforts being invested in this very delicate and sensitive process since we first fully committed ourselves at Burnham [New Zealand] in July 1997 towards achieving lasting peace by peaceful means,” Miriori said.

RNZ Pacific reports that O’Neill told the Business Forum in Brisbane that when the outcome of the referendum was tabled in the national Parliament, he was sure every MP would vote in the interests of a unified and harmonious country.

Guitars instead of guns
Meanwhile, the film maker of a forthcoming documentary about the Bougainville peace process, Soldiers Without Guns, has released a trailer.

In a social media message message to supporters last week, Will Watson said: “We were celebrating the 20th anniversary of lasting peace for Bougainville yesterday.

“The other big news is that I completed the trailer for the upcoming movie, Soldiers Without Guns. It took lots of work but I think it describes the Pacific’s worst civil war and peacekeeping with guitars instead of guns.

“Still lots of work to do to complete the film. I hope you like the trailer.

“I have been inspired to tell this story for the last 12 years. I am now very close to completing the feature length film.”

He has appealed for support in a funding campaign to complete the Bougainville project.

There’s a renewed call for the people of the autonomous Papua New Guinea province of Bougainville to have a say in any re-opening of the controversial Panguna copper and gold mine.

This comes as the final of a series of regional meetings on a possible re-opening, being held near the mine site in central Bougainville, has been held up by disputes between several of the parties involved.

A Panguna landowner and former candidate for president of Bougainville, Martin Miriori, says a plebiscite, run by the election office, is the only way to get full buy in from the people.

He says when Panguna was first opened 40 years ago few had a say.

“The white man exploited the ignorance of the people to bulldoze certain things. Now we have got educated people, the majority, so that is why I say a plebiscite will be a way forward, so that if anything goes wrong if we say yes to the re-opening of the mine then we have the responsibility jointly.”