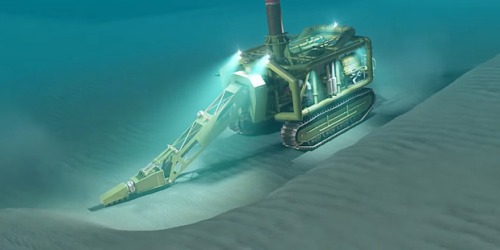 Trans-Tasman Resources proposes to use an undersea crawler to suck up iron-sand from the seabed. Graphic/ supplied

A “suck it and see” approach to the uncertainties of seabed mining is not good enough and is illegal – and that’s the essence of an appeal to the High Court.

Kiwis Against Seabed Mining (KASM) is appealing the Environmental Protection Authority (EPA) decision to allow Trans Tasman Resources to mine ironsand from the South Taranaki seabed.

KASM’s appeal to the High Court is on 15 points of law, new chairwoman Cindy Baxter said. One of them is that the EPA’s many conditions amount to an adaptive management approach.

Adaptive management is about changing the way an activity is managed in response to as-yet-unknown effects. KASM’s lawyers say such an approach is prohibited under government’s exclusive economic zone (EEZ) legislation.

Another point KASM wishes to appeal on is the EPA’s failure to impose a bond on the mining company.

And it says the decision makers failed to apply caution and environmental protection or to take cumulative effects into account.

KASM is asking the court to overturn the decision.

For South Taranaki iwi Ngā Rauru the decision to appeal was easy on cultural, environmental and ethical grounds, chairman Marty Davis said. But the legal challenge will be costly for the small tribe.

Forest & Bird chief executive Kevin Hague said the EPA has decided to allow mining based on uncertain and inadequate information – especially about its effect on the 30 marine mammal species in the bight. The society was also concerned mining would affect the rich marine life in the Patea Shoals.

“There is no legal assistance fund available to community, hapū and iwi groups to appeal the decision, unlike under the Resource Management Act.”

That put a cost on iwi and others, and was a deliberate strategy to disempower communities and support extractive industries, she said. Ngā Rauru would be lobbying the Attorney-General and Minister for the Environment to change those conditions.

The iwi is urging others to get involved.

Seabed mining will spread quickly across the country unless it is stopped, Mr Davis said.

Other groups may appeal the EPA decision. Te Ohu Kaimoana (The Maori Fisheries Trust), the Taranaki/Whanganui Conservation Board and Whanganui and Ngāruahine iwi all have interests in it.