A leading Papua New Guinea geologist says the Ramu Nickel mine has been massively undervalued and is another example of the “broad daylight rape” and exploitation of Papua New Guinea’s resources.

He claims the US$34 billion mine has been sold to the Chinese for just 5% of its true value.

“Sadly, the [PNG] government is continuously under selling multi-billion-dollar resources because it lacks analytical skills” says geologist Jerry Barry in a story by Mohammad Bashir in today’s Post Courier newspaper. This lack of knowledge and skills is further compounded by greed and ignorance says Barry.

Mr Barry calls on the government to “act radically and swiftly in changing the current trends in order to maximise realisation of the natural resources for PNG” he says.

Mr Garry estimates the Ramu Nickel mine is worth $US34 billion and not $US1.7 billion as is commonly reported..

“For brevity, Ramu laterite deposit contains 1.44 million tons of nickel and 0.143 million tons of cobalt … At today’s buoyant prices of 9US$/lb for nickel and 20US$/lb for cobalt, the in-situ value of contained nickel and cobalt in the Ramu project stands at about $US28 billion and $US6 billion, respectively. So the actual value of Ramu nickel cobalt project is $US34 billion or K92 billion at today’s prices”.

Mr Garry, who has worked with many international exploration companies added that the mine will produce in excess of 31,000 tons of nickel and 3300 tons cobalt annually for a period of 20 years (with the potential for up to 30 years).

“The worth of these metals produced annually may exceed $US750 million subject to fluctuating metal prices and production capacity. This is somewhat equivalent to well over K2 billion every year at today’s exchange rate and metal price,” he said.

Mr Garry said sadly, 85 per cent of the ownership of the Ramu mineral resource was sold to MCC, the Chinese state owned enterprise for a mere 5 per cent ($US1.7 billion) of the total value of this mega resource.

“To set the record straight, the present value of Ramu mine is worth about $US34 billion (K92 billion) and not $US1.7 billion (K4.6 billion) at today’s price but unfortunately very little if not none will be reflected in long-term tangible development in PNG”

The company has also said it has updated the Department of Environment and Conservation (DEC) and the Mineral Resource Authority (MRA) on the progress of its environmental plans and how they would be carried out.

Although the mining company describes the tailings disposal as “deep sea” the extensive tailings for the mine will be dumped at a depth of only 150 metres and there is considerable controversy about whether the tailings will remain where they are placed.

MCC has also disclosed that it has contracted the American-Canadian contractor Brass-Resan-Candive to supply the needed materials and equipment and to build the company’s submarine tailing disposal facilities. Brass-Resan-Candive will be involved despite the fact the submarine tailings disposal would be illegal in both the United States and Canada.

The company also says the treated mine tailings will be “buried” although this is technically incorrect as the tailings will not be covered in or otherwise secured – rather they will simply be pumped out of the end of a pipeline and allowed to spread freely.

Clan leaders not impressed with Chinese plans for coral blasting

CLAN leaders at Basamuk in Madang Province are worried about the underwater blasting operation that the developers of the Ramu nickel mine are proposing.

Spokesman of the Tong and Ongeg clans of Basamuk, Lois Medaing Gorongo said the sea is the peoples’ source or livelihood and he feared this would be affected if the operation was allowed to continue. Mr Gorongo said for years, the people had been living off the reefs in the area and refuted claims by the company that the reefs they proposed to blast were dead.

“…There are no dead reefs in the area, our reefs are alive and healthy and have been dwelling places for fish and other sea creatures, which we have and continue to depend on it for our livelihood,” he said.

He Gorongo said the exercise should not be allowed to go ahead as it was against the proposed mine tailings management plan and urged that other options be pursued.

“We maintain that the Government should not allow the mine waste to be dumped into our sea. We made this clear during the International Deep Sea Tailing Placement Conference, which was hosted in Madang in 2008. We would like the option of a land tailings dam to be pursued and are prepared to make land available,” he said.

Mr Gorongo said the exercise should be stopped temporarily as there were land-disputes that were yet to be settled. He said work had been stalled for some time and claimed that it was improper for the company to continue its operations.

Meanwhile attempts to contact the various sources from MCC to verify the claims have been unsuccessful. The provincial mines officer, John Bivi said his office did not have any data to assist. An officer from the World Wide Fund for Nature said the information would be contained in an impact assessment report and referred the paper to the Department of Environment and Conservation (DEC). An officer there said she was not aware of the plans. However she said the “person to talk to was not around.” Mineral Resources Authority’s acting managing director Phillip Samar said all environmental issues were being handled by DEC but the office would be releasing a statement on their position on the matter.

In another racially charged incident at the Rumu Nickel mine site, a Chinese doctor has refused treatment to a seriously injured Papua New Guinean worker who was left bleeding for several hours from a deep cut before obtaining help at a local village aid post.

On Saturday January 16 at about 9am, a Papua New Guinean worker, Stanley, cut his arm while sharpening a knife in the kitchen of the Chinese mess at the Ramu Nickel mine construction site at Kurumbukari (the Chinese workers refuse to eat with their PNG counterparts and have their own – superior – mess and kitchens).

Stanley was bleeding quite badly so he immediately sought medical aid from the duty Chinese doctor at the construction site but was refused treatment because he was a Papua New Guinean. Stanley was also unable to get treatment at the site clinic because there was nobody on duty. Stanley was forced to return to his room where he sought to treat the wound and stop the bleeding.

However, by mid afternoon Stanley’s wound was still bleeding and he sought the assistance of some of his colleagues. The Chinese doctor was still refusing to see him so Stanley’s co-workers organised a vehicle to take him off site to the Walium Health Centre. Here, some time after 4pm, more than 7 hours after the initailly injury was sustained, the wound was stitched and his arm was bandaged.

When initial inquires were made at the mine about the incident it was claimed firstly that Stanley had not informed anyone of his injury – putting the blame back on him; then that the doctor had not been available and his room locked when Stanley tried to get help. The Chinese authorities only relunctantly admitted the truth after persistent questioning. They have also now revealed that there were no first aid kits in the kitchen were Stanley was working – and indeed no first aid kits at all at the mine construction site that Stanley could access to treat his wound.

Stanley is currently signed of sick and is waiting to return to active duties.

Cholera outbreak suspected at mine camp

The very poor quality of working conditions, housing and sanitation facilities for local workers are being blamed for a suspected cholera outbreak at the Chinese Ramu Nickel mine site in Madang province.

The Provincial government’s health chief, Markus Kachau has set up an immediate investigation amid concerns the outbreak will spread to the whole workforce and the nearby population.

Already a number of workers are reporting acute diarrhea and vomiting.

The Provincial government has sent a team to the mine site that includes Mr Kachau, Dr Victor Golpak, the Chairman of the National Cholera Task Force, James Alam, District Environmental Health Officer and a pathology officer from the local hospital.

Cholera was relatively unknown in PNG until an outbreak last year on the coast of Madang province which was blamed on waste discharges from either Malaysian logging ships, Filipino fishing vessels or Chinese mine construction.

The disease has since spread into neighboring Provinces

Landowners shut down Ramu mine construction 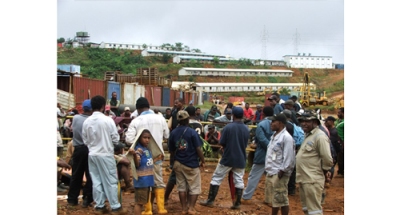 Angry landowners at the mine construction site

THE Kurumbukari landowners of the Ramu nickel and cobalt mine in Madang province have stopped all operations at the mine.
This followed a meeting of landowners at the mine site over outstanding issues in the Memorandum of Agreement.

As all construction work nears completion, the landowners’ representatives from the road and water easement and the special mining lease area decided in the meeting to stop all work and demand that the company honour its MOA commitments.

This week, the company’s community affairs officers have been issuing notices to the people to stop all activities on the SML areas as the project was in its final stages before the commissioning expected around March.

Representatives of the seven clans also demanded that the relocation exercise be speeded up if they want the people to stop all activities like gardening, building new houses or burying their dead.

Mauru clan village leader Kaso Memetua said the company (MCC) should relocate them properly before any work can proceed at the mine. Bruno Karima from the Mauri clan said the company should have already moved the first and second lot of people. He said it was slow in doing so.

MCC has tested the water supply and will be launching it this Friday, but the landowners said that they would not allow any activity until their grievances were settled.

All construction work at the mine is about to be completed, with several of the facilities installed at the different sites tested.
Among the facilities already installed are the six huge generators brought in from Finland which are expected to supply 22MW of power to the mine and the water resource area. The huge dam at the Gagayowo River has already been completed. The huge underground demarcation facility at Vianivi is in its final stages before full operation.

An MCC insider said that the company was doing all it could for the landowners but other parties like the provincial government and the National Government should also do their part under the MOA.