The National aka The Loggers Times

THE government, through the Mineral Resource Authority and Ramu NiCo mine, need to clarify the services they will provide in the impacted areas.

A source from the Ramu Nico management said some of the benefits accommodated in the mining review were still unclear on specific responsibilities they had.

Mindre village is about 1km from the refinery facility at Basamuk and is next to the mine-constructed powerlines but is still without electricity.

The source said it was stated in the agreement that the company was responsible to put power supply into the village but the government, through MRA, should be involved to assist with the service lines and its installation by its partner PNG Power Ltd.

He said PNG Power Ltd had regulations to install power in certain buildings.

“Most of the village houses are bush material houses, we need to comply with PNG Power regulations,” the source said.

He said MRA and the developer were still working on the issue.

Villagers claimed they were not effectively benefiting from the health services provided in their areas.

The Ganglau Aid post, near Basamuk, serves villagers around the refinery but not on an up-to-date basis.

Wass Sakor, from the Jangag village, said last Sunday that one community health worker who was supposed to be serving them at the aid post,was employed by the mine and went to work at the refinery.

“If he’s not there, we wait, one of his assistants at the aid post is old and we are concerned that he might not read the medicine labels well and give us the wrong treatments,” Sakor said.

PNGSDP board cuts ties with government

The PNG Sustainable Development Program under Sir Mekere Morauta has secretly removed any representation by the PNG government and the people of Western Province from its board.

The national Government recently learnt about the latest developments with the Chief Secretary issuing a statement claiming the actions by Sir Mekere and the board is illegal.

The Mekere board met in Australia recently and amended the Articles of Association to achieve this outcome.

It removed article 24(B) which provides for the appointment of directors by the PNG Government, and replaced it with a new article that suited Sir Mekere and his appointees.

The amendment to the article however is illegal as no consent from the PNG government was obtained. The move by the Mekere Board will be referred to the Singapore court, and also the police to deal with to ascertain if any criminality was involved.

“I am very disappointed to learn that the board has taken it upon themselves to illegally change the articles of association so that there will no longer be any real Papua New Guinean representation on it. It will now be controlled entirely by BHP appointed directors. It is rogue behaviour by the Mekere board that not even BHP would find acceptable,” Chief Secretary to Government Sir Manasupe Zurenuoc said yesterday.

“Given these events I am very concerned about the governance of the Sustainable Development Program. The board has shown a complete disregard for the company rules and has taken steps to eliminate proper oversight by Papua New Guineans.

“Legal action has already been commenced in Singapore due to other illegal actions being taking by them. The state is taking all available steps to protect the assets of the Sustainable Development Program and the interests of the people of Western Province.

“This move to take PNGSDP and its assets away from the people of PNG and the Western Province will be strenuously defended in court,” Sir Manasupe said.

Marengo scrabbling for cash to prop up Yandera dreams

Marengo Obtains US$3 Million Loan from Its Major Shareholder

Marengo Mining Limited is pleased to announce that, the Company has signed a loan agreement with its major shareholder, Sentient.

Under the terms of the Loan Agreement, Sentient will provide Marengo with a loan facility of US$3,000,000. The Loan accrues interests monthly at a rate of 9% per annum, payable quarterly. The maturity date of the Loan is December 31, 2014.

Subject to applicable shareholder and regulatory approvals, the principal and interest accrued on the Loan may be payable by the Company through the issuance of common shares or other securities convertible into common shares of Marengo.

The Company expects to use the funds obtained from the Loan to fund its working capital requirements and for general corporate purposes.

Listen to Baby Chan gleefully anticipating his junket trip to London… while displaying his total ignorance of the basic facts about the proposed Solwara 1 mine!

PNG’s Mining Minister, Byron Chan, has defended the government’s decision to buy a 15 per cent share in the controversial Solwara 1 deep sea mining project in the Bismark Sea.

The deal with Canadian mining company Nautilus, is worth around $US120 million dollars and was paid for by a Bank of South Pacific loan.

Mr Chan says the government could have bought bigger share if it already some of the proceeds from the ExxonMobil LNG project.

The government’s decision to participate in the controversial experimental seafloor mine’s been condemned by many activist groups.

But Mr Chan says they’re pleased to be moving forward, after the two parties resolved long standing issues that had had the potential to completely stop the project from going ahead.

Listen to the audio

Barrick Gold preparing for another brutal crackdown in Porgera

The Papua New Guinea Government has declared a state of emergency in Porgera, Enga Province.

Over a hundred policemen and soldiers from Port Moresby and Mt Hagen are already on the ground in the mining township, Highlands Divisional Commander Teddy Tei said Monday.

The rapid increase in uncontrollable  [unauthorised] mining activities within the mine lease area and other law and order issues in the valley has prompted the state of emergency.

A similar response, codenamed Operation Ipili, was executed in April 2009 for the same reasons that saw more than 300 houses within the mining lease area being razed to the ground by members of the security forces. Those houses were allegedly used by  [unauthorised] miners.

Deputy Commissioner of Police Operations Simon Kauba will launch the three month operation today in a grand ceremony at the Ipili sports complex in Paiam.

The reckless behaviour of  [unauthorised] miners who have descended into the valley and are extracting gold from the mine site has continuously disrupted production and risked shutting down the Barrick-operated “world class” open cut gold mine.

Killings on the streets of Porgera town have become common, resulting in tribal fights and the closure of the Highlands Highway leading into the valley.

Business houses and government departments also had to shut down as a result.

It is not clear whether security personnel will remove settlements around the mine proper as in 2009 but police have moved in with more determination than before to solve the problems. Security commanders briefed community leaders, government and business representatives on Friday.

They said their focus was to stop the  [unauthorised] mining activities in the mining area, which were getting out of hand, as well as addressing other law and order issues in the valley.

The security contingent will live outside of the mining premises and conduct operations.

But as during the 2009 operation, sources on the ground say all  [unauthorised] miners have already fled Porgera and will wait out the three-month period and return after the operation has finished.

In 2009, all  [unauthorised] miners fled to their home provinces across the highlands region while the operation took place.

But as things cooled down the miners gradually returned and the number has increased since. 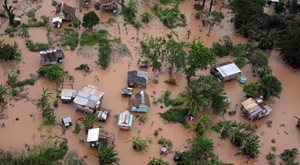 Employees of gold miner St Barbara have been banned from re-entering the country by the Solomon Islands government, three weeks after heavy rain and catastrophic flash flooding caused the evacuation of the mine.

The floods killed 21 people in the Solomon Islands, and left 50,000 people homeless.

The restriction on entering the country has been issued to allow a joint agencies investigation between the Labour Division, Immigration, Police, Ministry of Mines and Energy, and the minister of Environment, to look into the safety and security of the mine site.

The Prime Minister’s special secretary Dr Phil Tagini has said that the immigration department has prevented St Barbara employees from entering the country.

“We all want to get to a situation where the mine stabilised, and then profitable,” he said.

“The general community, the feeling downstream and along the river, they felt that the social licence hasn’t been thoroughly complied with, in terms of how the miners left the mine without informing the relevant departments.”

Dr Tagini said that the police, the land-owning communities and the Environment Department felt St Barbara’s employees actions were not totally appropriate or responsible.

Gold Ridge director Tim Lehany has said that all reasonable steps were taken to secure equipment and hazardous materials before the employees left the Gold Ridge site.

The stability of the tailings dam has been called into question, with 8000 people living nearby in an area that will be in danger if the dam fails.

The Solomon Islands authorities, in conjunction with United Nations specialists, will assess the stability of the tailings dam, as well as look at issues such as the various chemicals, cyanide, explosives and other hazards to the environment and people.

1000 millimetres, a full metre of rain was recorded over the four days preceding April 4, including 500mm in a single 24 hour period.

The flooding caused extensive damage to roads, including road access to the mine and a single key bridge, which isolated the mine from fuel supplies, food and medical supplies.

In response to the flooding crisis, St Barbara and Gold Ridge Mining donated $100,000 to the Australian Red Cross to assist with emergency aid.

NGOs in PNG stunned by government buying into Nautilus

Non-governmental groups in Papua New Guinea have condemned the PNG government’s decision to renew a commitment to the Nautilus company’s ocean floor mine.

The Canadian company is set to become the world’s first undersea miner through its Solwara One project in the Bismarck Sea.

A two-year delay in the project has now been resolved, with the PNG government taking a 15 percent stake in the development.

The spokesperson for the NGO Act Now, Effrey Dademo, says they are stunned because the government had said a petition from coastal landowners had made them think again about being involved.

“We have no idea and no information as to why there has been a change of position and we are asking the Government to come out clean and say why it has gone ahead with and what of the petition that was presented by the people to the Government, saying they should not consider it because it is a serious risk to the environment.”